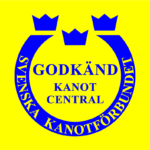 In The Early 1970s, Halen, Råslången, Immeln And The Other Lakes In The Area Began To Be Used More And More By Canoeists.

First by tourists in small groups, and later by larger groups in kayaks with Alltidhults Fritidsgård as a camp site. Many thought it was a nice sight to see these flatter kayaks glide over the waters of Lake Hala. Then Eve Peter and Evert Eriksson began to think about forming a canoe section within Olofströms Fritidsklubb.

In the summer of 1974 Eve announced in the newspapers that a couple of Skåne’s canoe leaders Karl-Gustav Karlsson, “KanotKalle” and Karl Gustav Persson, “Eskimo Gusten” would come to Olofström and Halens Camping to introduce kayaking. So happened a nice Sunday with a lot of interested.
A board was formed with Mats Holmqvist as chairman, Ing-Mari Svensson as secretary and Algon Andersson as treasurer.

Canoes, mainly Canadians, were procured with the help of Trygg-Hansa, who has been involved in the so-called “Canoe wave” that would increase interest in tourist canoeing. The government, through “Youth Minister” Camilla Odnoff, also contributed funds to the purchase of canoes.

Many young people went to Halen. The former janitor’s residence and old changing room made Olofströmmunicipality available to the section. The young people who joined the canoe section were helped by their parents and other adults to make the premises useful.

After a few years of successful work in the Canoe Section, it was decided that the business would be run by the Main Board of the Leisure Club and provide income to other activities of the association. For many years, the canoe fleet was built primarily by Eve Peter.